Home / Reviews / Yamaha Arius YDP-143 Review
We hope you enjoy and find value in the products we review. FYI we may receive a small commission if you buy through the links on this page. This does not influence what products we recommend and all our suggestions are made after an independent review process.

The Yamaha Arius YDP-143 is a digital piano that offers one of the best replications of an authentic acoustic piano in its price range.

Offering a touch and tone very much like the real thing, it’s a great digital piano for players aspiring to master their craft without having to invest in a costly acoustic piano.

An 88-key full range digital piano, the YDP-143 features Yamaha’s renowned Graded Hammer Standard (GHS) keyboard. This provides the keys with a touch sensitivity exactly like an acoustic, with light touches at the high end and heavy touches at the low end.

This authentic feeling to the keys makes honing strength and technique much easier, especially for those looking to master their classical style.

The black keys feature a gorgeous matte finish, which not only makes them amazing when playing, but helps to reduce the impact of excessive moisture, a notable issue that can arise from extended periods of playing. 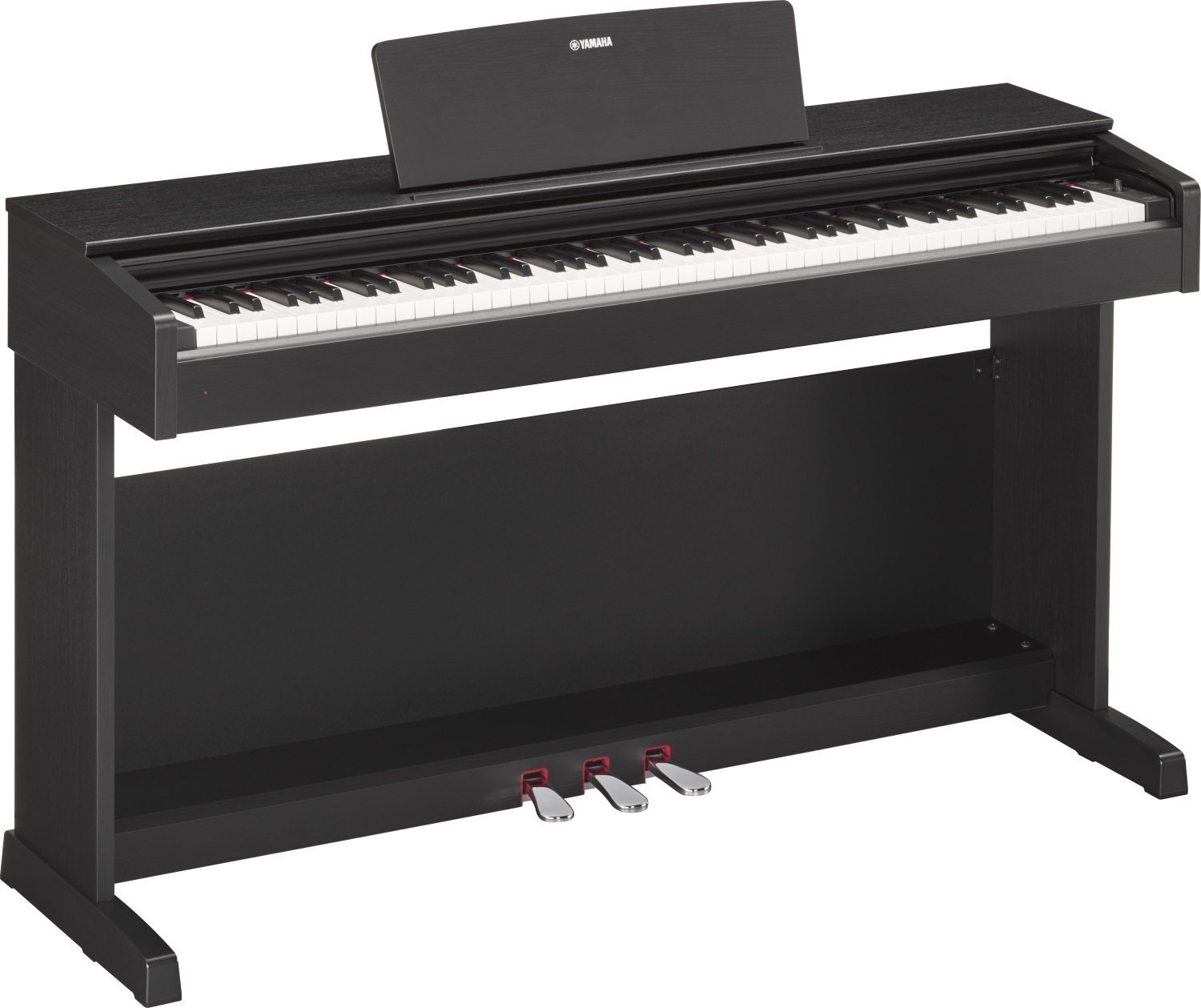 When it comes to sound sampling, the YDP-143’s Pure CF Sound Engine has done a wonderful job reproducing the sound of a grand piano. In this instance, the famous Yamaha CFIIIS 9 concert piano is used to create the sample sound for this digital piano.

Simply put, the sound is fantastic. The dynamics and expressiveness created in YDP-143 make it sound as close to the real thing as you can get, which is certainly good news for pianists looking for a way to practice their classical style without a grand piano.

Another great aspect regarding the YDP-143 is the inclusion of authentic pedal response. There are three pedals included, which is great because there is no need to plug these in separately, while they offer the chance to perform more dynamically compared to single-pedal pianos.

The half-damper pedal control allows for much more nuance as you play, very much the same as with a grand piano. It makes it possible to increase the length of sustained notes when pressing the pedal.

Damper resonance allows for a deeper resonance to be created as the pedal is used, helping to recreate a much more authentic acoustic piano sound. This pairs well with the 50 pre-loaded classic songs, making it easier to recreate that authentic sound as you learn and play along.

Given the compact design of the YDP-143, it makes sense to have a good headphone port for private playing, as not everyone wants to serenade their home as they play. The internal stereophonic optimiser provides exceptional surround sound quality when using headphones, allowing for hours of undisrupted practice.

There are also a host of great features that make the YDP-143 that bit more suitable for a modern player. For instance, you can connect the YDP-143 to a computer and mobile devices, which only expands the capabilities of the piano.

Any iOS device can connect to the YDP-143, although this does require either a Yamaha UD-BT-01 Bluetooth adaptor or a lighting-USB camera adaptor. If done, a free Digital Piano Controller application can be downloaded and used to adjust settings, change voices, and record your performances.

Unfortunately, this application is only available on Apple devices using iOS, so won’t be available with Android and other mobile devices. However, a USB cable connects the YDP-143 to most computers, with various applications available on this hardware too.

Another great feature is the ability to record. The YDP-143 features a built-in recording function that captures your performance with one simple button. Two tracks can be recorded and played back simultaneously, meaning you can record each hand separately as it plays, while also create overlays using different voices.

For instance, you could record both a piano and strong voice separately and then play them back simultaneously. It’s a fun feature that allows players to create endless hours of unique recordings combing different voices.

The Yamaha Arius YDP-143 is a great digital piano that faithfully recreates the sound of an acoustic piano. With an 88-key Graded Hammer Standard keyboard, the YDP-143 doesn’t just sound like a grand piano but feels like one too.

A host of great features, including mobile connectivity and built-in recording and playback round out what is an already fantastic piano.

Check out our reviews of other Yamaha digital pianos below.
Yamaha Arius YDP-S52